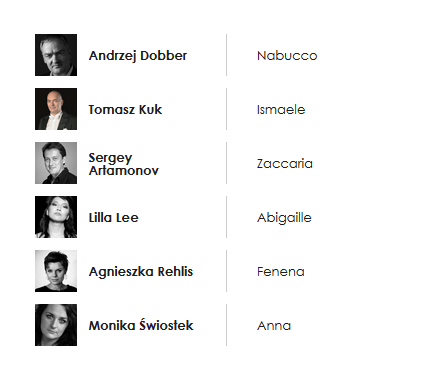 Nabucco was Giuseppe Verdi’s third opera, his first success after a premiere at La Scala and his first work with strong political overtones. Though the title is the Italian version of the name of the biblical Nebuchadnezzar, king of Babylon, in 1842 when Nabucco was first staged, Italy, split into small kingdoms and regions, was already striving to unite and free itself from the rule of Austria and France. And in the opera’s Act 3 the people of Judea conquered by Nabucco sing Va, pensiero…, i.e. ‘Fly, thought, on golden wings, fly over valleys and hills, where, soft and mild, the sweet air of our native land smells fragrant’. This chorus quickly became an informal patriotic hymn for the Italians, and Verdi achieved fame. It always makes a strong impression, as confirmed by the fact that censors in communist Poland delayed Nabucco’s postwar Polish premiere for some years. In his spectacular Warsaw production from 1992, Andrzej Kreutz Majewski augmented that impression even further by making the Wailing Wall of Jerusalem, a symbolic site for Jewish ritual prayers, the focal element of his stage design. Nabucco embodies everything thanks to which Verdi conquered the world of opera. The opera’s themes are power and freedom. True to tradition, arias, ensembles and choruses are mutually intertwined and merge into long scenes of undiminished tension. The role of Abigaille, psychologically believable and filled with drama, tempts ambitious singers with an adequately strong soprano voice to show off their acting and vocal skills. Abigaille opens the gallery of Verdi’s opera women whose personalities and emotions expressed through singing are unparalleled.In the original Italian with Polish surtitles